Thank you! Your message has been sent.

A breast lift or mastopexy is a procedure designed to raise the nipple-areola complex higher on the breast to a more aesthetically pleasing position. The skin of the breast is tailored to improve the form of the breast according the desires of the patient. Breast tissue can be removed if required or volume added with use of breast implants. The amount of “lifting” that is required varies greatly from patient to patient.

Minor Breast Lift
Many women present with what might be described as minor sagging or drooping of their breasts. When very minor, the desired result can be achieved with a small incision around the edge of the upper areola. This procedure is performed under local anesthesia and is reserved for patients who have good form and volume to their breasts but find their nipples are too low or pointed slightly downwards. 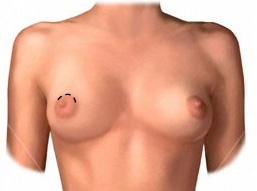 Figure 1
The nipple and areola can be raised slightly with a small incision at the upper margin of the areola.

In other patients, their nipples are too low for this procedure and they require a lift called a “donut mastopexy”. This leaves an incision around the circumference or margin of the areola. This technique can correct a greater degree of sagging of both the nipple-areola and the skin of the breast. It allows the nipple-areola to be raised upwards and for the skin to be tailored to improve breast form. If more volume if desired, breast implants can be inserted during the procedure with the same inconspicuous incision. 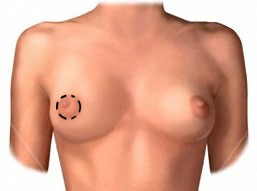 Figure 2
The position of the nipple and areola can be repositioned to a greater degree with a “donut mastopexy” procedure which leaves an incision around the circumference of the areola.

Moderate Breast Lifting
When a woman’s breast shows a moderate degree of sagging, the nipple-areola can be raised and excess skin removed using a procedure that can resemble a keyhole or vertical-incision mastopexy. The incision will be around the circumference of the areola combined with an inconspicuous vertical incision that extends downwards to varying degrees depending upon the severity of the patient’s condition and the desired results. Breast tissue can be removed to a moderate degree through this incision to achieve improved form and less volume. If additional volume is desired, breast implants can be inserted during the procedure. 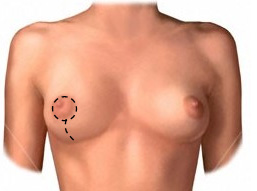 Figure 3
The “keyhole mastopexy” technique is used when the nipple and areola must be raised when combined with moderate amounts of skin and fat removal. Along with the incision around the areola, a short vertical incision extends from the 6 o’clock position to the inframammary line (line under your breast)

Major Breast Lifting
Patients who present with breasts that are sagging, have nipples that are positioned very low or have too much skin or volume to their breasts will require a breast lift called an “inverted T” or Wise pattern mastopexy. The incision is similar to the “keyhole” technique but adds an incision placed within the inframammary fold. This procedure allows maximal lift and improvement in the form of a woman’s breasts. While there is more scarring, they usually heal very well and are surprisingly inconspicuous. For the vast majority of patients, the negative feelings of having scars on their breasts is greatly overshadowed by the improvement in the form and aesthetic appearance. Similar to other procedures, breast implants can be inserted at the time of surgery to provide addition volume, projection and improvement in form should this be desired.

Liposuction may be combined with all breast lift procedures to optimize results. 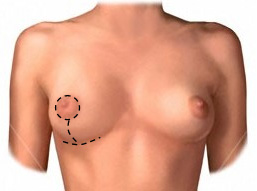 Figure 4
The “anchor” or “inverted T” incision is used when significant sagging is present or when moderate to major amounts of volume removal is required.